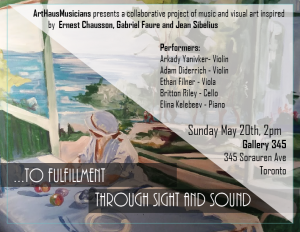 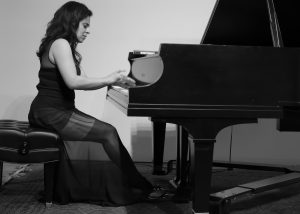 Described as having “brilliant insight and extreme musicality” by the Toronto Star, Canadian pianist Elina Kelebeev is becoming known as a soloist and collaborative pianist. Elina has collaborated with established vocalists such as renowned Canadian baritone Russell Braun and Ukrainian soprano Anna Shafajinskaya; she has also teamed up with rising stars such as soprano Teiya Kasahara and bass-baritone Philippe Sly.

Elina regularly performs with violinist Arkady Yanivker, and has performed at the Music Niagara festival with artists such as the Glenn Gould Quartet and flautist Camille Watts. Elina’s solo engagements include recitals and performances throughout Toronto and in New York City, Brussels, Sanremo, and Moscow. Her performances were broadcast on CBC Radio, the former Classical and Jazz Radio Toronto, as well as Moscow and Brussels Classical Radio Stations.

Elina Kelebeev received her Master’s Degree in Performance, Collaborative Piano, at McGill University. Previous studies were at the Moscow Central Music School, the Manhattan School of Music, and The Glenn Gould School. Elina serves as staff accompanist at the University Of Toronto (since 2010), and at the Royal Conservatory of Music (since 2005). She maintains a private studio where she teaches piano and coaches singers.